Processing and recovering from abuse

One thing about narcissistic abusers is that they’re maddeningly predictable – and very difficult to change.

Narcissistic behavioral patterns differ a bit according to type of relationship – a narcissistic significant other will be a bit different than a narcissistic parent. But no matter what type of narc you’re dealing with, they have some very predictable behavioral patterns. This website has a list of some general characteristics – it uses male pronouns to describe them, but these things apply to narcs of any gender identity.

Some of the major calling cards of a narc include…

Gaslighting, which is the process of manipulating someone into questioning their memories and even their sanity. Narcissists do this by denying that something happened, changing significant details, and constantly telling you that your memories and perceptions are wrong. They will also likely tell you that you’re being too sensitive, or don’t have a sense of humor. A lot of them will accuse you of putting words in their mouth when you call them out on their lies or bad behavior, or say something in a passive-aggressive manner so that later, they can deny that it meant what you thought it meant.

An example of this is when a former narc friend told me that a lot of aspects of my life seemed boring to her. When I called her out on calling me boring, she accused me of putting words in her mouth, because she never directly said that she thought I was boring. And no, she didn’t, which is how gaslighting works. Had I not been well-versed in narc tactics such as this, I might have found myself questioning my own perceptions. Yes, she said this was boring and that was boring, but no, she never said I was boring.

However, her multiple negative comments on things in my life which she knew were important to me was a passive-aggressive way of letting me know she thinks that I’m a bore – and it was done in such a manner that she could later deny it and try to gaslight me into thinking that I was the one misinterpreting the situation. “I never said that” or “you misunderstood/misinterpreted” are common narc refrains, meant to make you question yourself. Which brings me to…

Passive aggressive behavior, which often goes hand-in-hand with gaslighting. This is when someone indirectly makes demands or responds to you. It’s indirectly expressed hostility – instead of telling you what the issue is, they’ll pout, procrastinate, practice learned helplessness and/or intentionally screw things up, make excuses, give you backhanded compliments or make sarcastic remarks.

An example of this is when my abusive ex was upset that I asked him to pull his weight with chores and paying bills on time, he intentionally hid (according to him, he “forgot”) important mail that I needed sent out in his car so that I ended up getting calls about overdue accounts. This happened just after an argument over how he had failed to write out some checks, claiming he didn’t know how to write a check. When I showed him, he simply kept “forgetting” to do it. It was clear to me that hiding the bills instead of mailing them was passive-aggressive retaliation for me having asked him to do something, but because it was passive-aggressive, he was able to deny it and claim he’d just forgotten.

Narcissistic rage is possibly the scariest of their traits. Narcs can’t handle any sort of criticism, no matter how slight. As soon as they perceive that you have criticized them in some way, the wound they suffer as a result is so great that they often fly into a rage. This article from Psychology Today outlines some of the characteristics of narcissistic rage, but some highlights include general irritability, having a short fuse, always needing to have the last word, won’t apologize, or gives non-apologies, will continue to argue until you give up or back down. Presenting them evidence doesn’t help; if you provide definitive proof that they’re in the wrong, they’ll usually twist the situation to make it seem like you’re the aggressor and you’re picking on them. 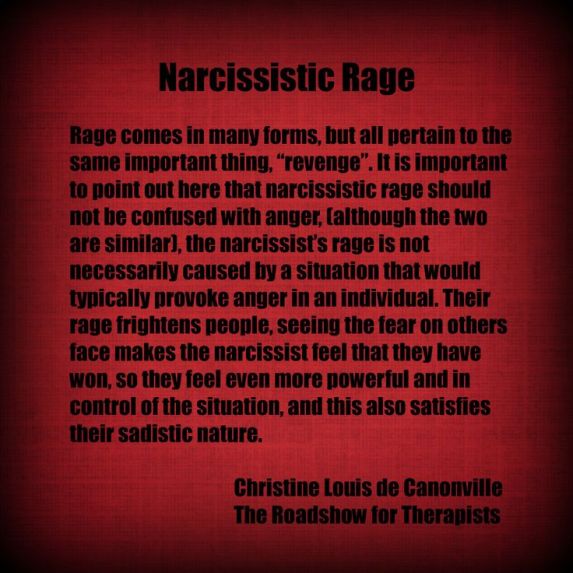 Controlling behavior in general can be an early warning sign that you’re dealing with a narc. But be careful here – not all controlling people are narcissistic. Perfectionists can be controlling, as can people who are highly insecure, but they’re not necessarily narcs.

Masterful manipulation is another hallmark of a narcissist. They’re skilled at turning any situation around on you and making you the bad guy every time – even if they were the ones who did something wrong, they’ll find a way to make it your fault or gaslight you into questioning yourself.

An example of this is a former friend of mine who would immediately begin to cry and get dramatic any time I got upset with him, which ended in me reassuring him and feeling bad for having upset him so much. That’s manipulation at its finest – not only did he avoid being held accountable for anything, but he manipulated me into feeling like a horrible person who was being way too hard on my poor sensitive friend.

They can also be extremely convincing – many people who have clashed with a narc find that the narc easily turns other people against them. Most narcissists can be downright charming when they want to be. Because they’re deliberate and calculating, they’ll often do things that make them seem like great people in the eyes of others – my mother gives gifts and money generously, and always makes a big deal out of people’s various life events and accomplishments so that they perceive her as generous and caring.

Narcs also have an answer or explanation for everything, and when they’re in manipulation mode, they know all the right things to say to get people on their side. Because of this, it can take a while for others to see through the act, especially if they’re not as close to the narc as you are.

Grandiosity is probably one of the first things people think of when they hear the word “narcissist,” but grandiosity can manifest itself in remarkably subtle ways. One of my narc relatives doesn’t have a grandiose personality in any way, but has grandiose ideas, in that she believes that she is always right. However, she doesn’t always correct or contradict others – many times, she silently disagrees and quietly reacts, leaving people confused as to why she was being so much fun one minute, and is now sullen and silent the next. (Narcs are also known for rapid mood swings.)

There are over-the-top grandiose narcs, such as the current POTUS, who loudly proclaim their superiority to anyone who will listen.

And there’s lots of degrees of grandiosity in between. If someone thinks that they’re always right, knows more than others (even in fields in which they other person is an expert and they’re not), is better than others in some way, and refuses to acknowledge that anyone else could be as good/knowledgeable as they are, then you may be dealing with a narcissist.

An example of this is the same relative mentioned above, who believes that she is “classy” (her word) and feels that she’s superior to other people she labels as “trashy” or “uneducated.” She also says things such as “there are some blacks that are okay,” but that there’s “nothing worse than a low-class black.” She once got upset with me for posting too much about Black Lives Matter in my personal blog.

Grandiosity, as shown in this example, can sometimes manifest itself as racism, sexism, ableism, and homophobia.

Patterns of idealization followed by dehumanization is the last major trait I want to point out. This means that a narcissist will often start out really liking someone, to the point of putting them on a pedestal and believing they can do no wrong, until that person does something to upset the narc. Then the reaction in the other direction is just as extreme – the person is demeaned, humiliated, raged at, etc.

I had a narc boss once who would hire people, be in love with her hires to the point that they could massively screw shit up and in one case, cost us a huge account, and she would vehemently defend them and blame others for their mistakes. But inevitably, she would turn on them the moment they disagreed with her or disappointed her in some way. When that turn happened, the person went from best friend and office pet to being the recipient of silences and hostile behavior. The unfortunate victim was always fired within a few months, if they didn’t end up quitting first.

I’ve even seen narcs do this with non-humans. For example, a narc relative of mine will often love a restaurant for a while, then suddenly turn on it and never go there again. She’s also done this with particular foods, vacation spots, and department stores.

Narcs love you until they don’t, and there’s often no in-between – and no warning.

There are so many more traits that narcissists in particular share, but these are the major ones that I’ve seen in various narcs, and have talked about with other survivors of narcs. Individually, any of these things is frustrating; rolled into one big package, with other negative traits thrown in as well, and you end up with a person who is extremely difficult, if not downright impossible to deal with.

If you’re dealing with someone like this, please know that you’re not crazy, you’re not wrong, and you don’t deserve it. Narcissists have an uncanny ability to get inside someone’s head and completely tear them to pieces, leaving them blaming and questioning themselves.

Trust your instincts. If they’re telling you that something is off, don’t dismiss that feeling.

Does anyone else out there want to share any traits of narcissists that are particularly frustrating?